Among the oldest cars in the Royal Stables is a Daimler DE27: Limousine from 1950. It can seat up to eight people and is still in use. The other treasure is a Cadillac Fleetwood Seventy-Five Limousine from 1969. It is used when transporting ambassadors and for ceremonial occasions.

The first Royal car was bought in 1899 by crown prince Gustaf (V). At that time there were about 100 horses in the stables. Cars took gradually and quickly over most of the transport missions at the Royal Court from the beginning of the 20th century. Today about 6 000 transport missions are performed every year in connection with the Royal Families official duties and the Courts daily responsibilities.

There are about 20 cars in the garages. Contrary to the horse-drawn carriages, older cars have not been kept at the Royal Stables. They have over time been replaced by modern and safer cars. Nevertheless, two classic cars are kept in the garage. They are used at special events, and are shown at guided tours.

Safety and efficiency are the guiding principles in all kinds of transport missions and the Royal Chauffeurs are specially trained. Through the use of modern information technology, the transport management system contributes to efficient planning and coordination of all transport missions, both in everyday work and at ceremonial occasions.

The King has a deep commitment in environmental issues. This is a guiding principle for the Royal Stables. New ”green” car models that use renewable fuel, such as biogas or hybrid technology, are constantly reviewed. The Royal cars are gradually replaced, depending on economy and the supply of suitable cars on the market.

This Daimler from 1950 is the oldest car in the Royal garage, bought during the last reigning year of king Gustaf V. It was frequently used by his successor, king Gustaf VI Adolf. This type of car could have different bodies, and this limousine body was built by Hooper & Co, London. The car has 8 seats (including the driver). Under the driver’s seat is an exclusive toolbox, and the car has electric windows. The windscreen can also be opened. The registration number of the car was A1 until 1973.

The car was carefully restored in 2008-2009. This classic Daimler is still used at special events, such as the Crown Princess wedding in 2010, when King Carl XVI Gustaf and Crown Princess Victoria arrived to the wedding ceremony in Storkyrkan in this car.

This is the last Cadillac that was bought. Cadillac was very appreciated for many years among the Royal Family. This car from 1969 had a lot of high-tech equipment such as speed control, power steering, power breaks, central lock, electric windows and air conditioning that is individually adjustable. The car was bought by King Gustaf VI Adolf, but was previously frequently used by our present King and Queen until the late 1980ies. The registration number of the car was A2 until 1973.

The Cadillac has 8 seats (including the driver).is occasionally used at special events, such as formal audiences, on the National Day and other official arrangements. 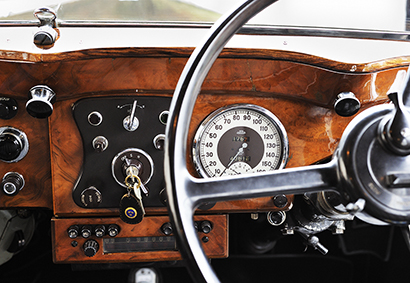 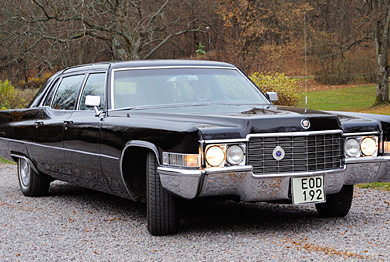 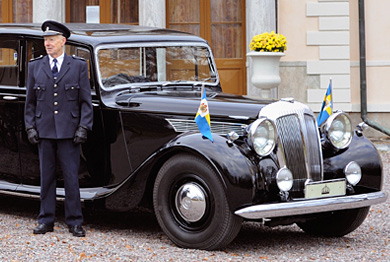 Daimler Limousine 1950. The car is the oldest in the Royal Mews and perhaps the most comfortable. It is still used on special occasions. Photo: Charlotte Gawell/Royalpalaces.se 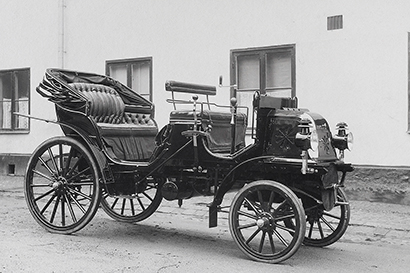 In 1899, Crown Prince Gustaf (V) bought Sweden’s first ‘royal’ car. This was a Daimler with a 5 horsepower engine, room for four people, a hood and removable rear doors. The car featured rear wheel chain drive and a steering handle instead of a steering wheel. The Daimler later became Stockholm’s first hire cab, the taxi of its time. Photo from the Bernadotte Library’s archive.