The sculptures in the Orangery Museum

A significant collection of Swedish sculpture can be seen in the Orangery, including works by Johan Tobias Sergel and Carl Milles. These sculptures are part of the National Museum's collections, and are on permanent display in the Orangery Museum.

For much of the 18th century, Swedish sculpting was dominated by the French craftsmen who had come to work on the new Royal Palace of Stockholm.

For example, bronze versions of Bernard Foucquet's Abduction Group – seen here in dark-patinated plaster, with their themes from ancient mythology – stand in niches on the façade of the Royal Palace of Stockholm.

The goddess Ceres – who holds torches and searches the underworld for her daughter Proserpina, who has been carried away by Pluto – and her priestesses, the two caryatids – who hold the dishes on which fires would be lit – were sculpted by Sergel for the soirées at the Royal Palace of Stockholm where, following the tastes of the time, the sculpture gallery would be admired by dramatic torchlight.

The torches that now flank the doors of the Orangery Museum are copies of Sergel's torches, and recreate the lighting effects of his time when lit with gas in the evening.

The model for L'Archevêque and Sergel's King Gustav II Adolf Monument on Gustav Adolfs Torg is also on display.

During the time of King Gustav III, Johan Tobias Sergel was Sweden's greatest artist. In Rome in the 1770s, he created the Faun, Diomedes and Mars and Venus.

In Stockholm he sculpted the memorials to King Gustav III, and the plaster model for the statue on Skeppsbron of King Gustav Vasa and King Gustav II Adolf is here at the Orangery Museum.

In 1818, Bengt Erland Fogelberg exhibited the first versions of the three æsir that he carved from marble for King Karl XIV Johan.

Fogelberg has imagined Odin as a god of war:

"gazing from some Scandinavian mountain peak."

On his helmet are the ravens Hugin and Munin, and on his shield is a valkyrie with drinking horn and sword, eagle and wolf.

Thor, the god of thunder carrying his sledgehammer over his shoulder, is a symbol of nature's power and Nordic manly courage.

Baldr, the most good and the weakest of the Nordic gods, had sworn an oath not to harm any of nature. Arrows and spears bounced off his unwoundable body, until one day the wicked god Loki managed to kill him through trickery.

The Pink Gallery – the 19th century

Throughout the 19th century, myths and sculptures of Greek and Roman antiquity continued to inspire Swedish sculptors, most of whom also spent time in Rome and carved pieces from Carrara marble.

For example, Bacchus the god of wine was reproduced by Johan Niklas Byström and Erik Gustaf Göthe, and a bacchante in the retinue of the gods was carved by Johan Peter Molin.

Byström also reproduced the tragic love story of Hero who, one stormy night, saw her lover Leander drown when the torch she used to guide him with was extinguished as he swam to her across the Hellespont.

Alongside these classical images, a number of memorials were also commissioned during the 19th century to Swedish kings, politicians, poets, scientists, and so on. The plaster models for some of these sculptures are exhibited: Fogelberg's King Karl XIV Johan at Slussen and Johannes Frithiof Kjellberg's Linnaeus in Humlegården, both in Stockholm, and Carl Gustaf Qvarnström's Esaias Tegnér in Lund.

The museum was made possible thanks to King Carl XVI Gustaf's decision in 1988 to make the Orangery available as a sculpture museum. Photo: Royalpalaces.se 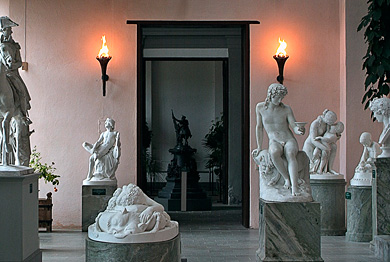 The torches that now flank the doors of the Orangery Museum are copies of Johan Tobias Sergel's torches, and recreate the lighting effects of his time. Photo: Gomer Swahn/Royalpalaces.se 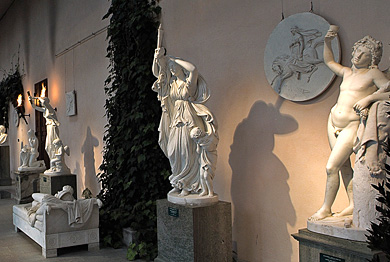 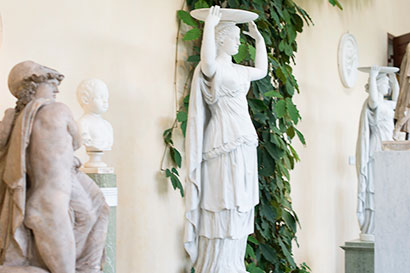 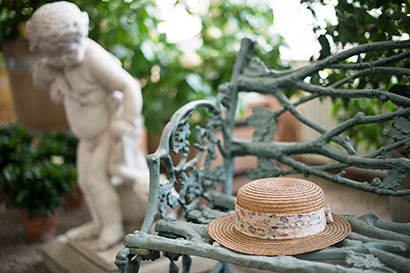 During the 19th century, the myths of ancient Greece and Rome were a rich source of inspiration for Swedish sculptors. Photo: Kate Gabor/Royalpalaces.se 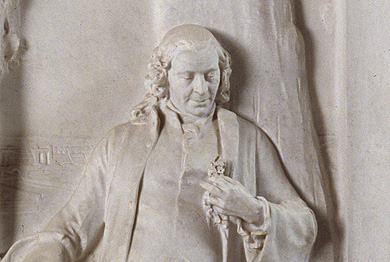 Carl Linnaeus by Christian Eriksson. Guides to the museum, its history and the sculptures on display can be purchased at the Orangery Museum. Photo: The National Museum

A guided tour takes approximately 45 minutes. The guided tour is included in the entrance fee.

Ulriksdal Palace and the Orangery Museum are open for group visits, booked in advance, during May–September.

A tour of Ulriksdal Palace gives the visitor an exciting view of interior design spanning from the 1600s to the 1900s. On view are rooms ...

Centrally located in the Ulriksdal Palace grounds beside the palace itself lies the greenhouse built in 1600s. Nowadays the Orangery hous...

From the time that Jakob dela Gardie built a palace by Edsviken strand, some form of garden and park has also existed at Ulriksdal.

Sweden's oldest Rococo theatre, which dates back to 1753, offers both performances and guided tours. In 1976, Princess Christina showed t...

Ulriksdal Palace has had a chapel since 1662. At that time a chapel was built in the palace's northern wing by architect Jean de la Vallé...

The Orangery in Ulriksdal Palace Park is housing sale from the Royal Gift Shop. You will also find visit information about the attraction...

Queen Kristina's coronation was highly controversial. She chose not to be crowned in the traditional location, and refused to wear the Qu...

Ulriksdal Palace, with its beautiful location, was due to become Crown Princess Margareta and Gustaf Adolf's home. But things did not wor...