The Royal Apartments at the Royal Palace

The Royal Apartments at the Palace is a collective name for the magnificent state rooms that are used at The King and Queen's receptions. Discover the rooms on your own or join the guided tours.

*In conjunction with His Majesty the King's reception an apartment can be completely or partially closed.

There is a banquet hall used at gala dinners, cabinet meetings, and parliamentary evenings. There is also a guest apartment used as a guest residence for foreign dignitaries on official state visits. The Bernadotte rooms are used at medal presentations and formal audiences.

The well-preserved interior provides historical insight from the 1700s and onwards, where each monarch has left traces of his time. Here you can see Gustav III's state bedchamber, Oskar II's writing room and the most recently decorated room - King Carl Gustaf's Jubilee Room.

The Royal Apartments also include the Hall of State with Queen Kristina's silver throne as well as the Apartments of the Orders of Chivalry, which houses a permanent collection of the regal orders.

Originally the Pillared Hall, in the north-west corner of the apartments, was Adolf Fredrik's dining room. Today the room mainly reflects the 1780s, when it was modernized by Gustav III.

Leaving the Pillared Hall, you enter the Victoria Salon and the splendour of the 1800's. Both the chandelier and the carpet are impressive in size. The room is a fine example of Victorian style.

The Bernadotte Gallery contains pictures of almost all the older members of the Royal Family. The room provides the perfect opportunity to relate the story of Karl XIV Johan and the unsettled early 1800s.

The following room is used for formal audiences. Beside it lies the newly decorated Jubilee Room that represents the skilled craftsmanship of our times.

The last room in the Bernadotte Apartment is also a gallery also containing a number of paintings of members of the Royal Family. Here you will see for instance Gustaf VI Adolf, Crown Princess Margareta, and our current King and Queen, King Carl XVI Gustaf and Queen Silvia.

The State Apartments consist of nine state rooms. The original plans for this section were made during the “Great Power" era in Sweden by palace architect Nicodemus Tessin the Younger. Not all plans were finished, but despite this the rooms are unparalleled in northern Europe .

In the north west corner of this section lies the Cabinet Room. Still today the room is used during cabinet meetings between The King and the government. This room was originally Gustav III's dining room. During his reign many guests were invited to dinner, but only members of the Royal Family ate, watched by the other guests!

A few rooms further in you will find Gustav III's state bedchamber. It was in this room that Gustav III died in 1792 from a gunshot wound he received two weeks earlier.

The rooms that follow, known as Karl XI's Gallery, make up a smaller copy of the mirror room in Versailles. You will see an impressive ceiling painting portraying Karl XI´s war in Skåne in the 1670s. However, the room is most renowned as the room where today's reception dinners are held. Once again this presents a good opportunity learn about both the “Great Power" era and gain insight into present-day receptions at the palace.

The last room that you will visit during the guided tour is the Palace's ballroom, better known as The White Sea Hall. Nowadays the room is not used so much for dancing but plays a special function during the annual reception dinners.

The Grand Guest Apartments is largely used for state visits. Therefore the rooms are more profusely decorated than one would expect of a traditional 1700s milieu.

The apartment contains furniture from different epochs, most of which was made in Stockholm in either the 1700s or 1800s, and is therefore interesting from a style-history perspective.

The Hall of State

Carl Hårleman was the architect in charge of the room's interior design. Hårleman formed the room closely to plans drawn up by Nicodemus Tessin the Younger.

The room was ready for the Parliamentary Opening of 1755 and was where parliamentary meetings were held under the chairmanship of the King.

The silver throne was a gift to Queen Kristina from Magnus Gabriel De la Gardie for her coronation in 1650, and is one of the palace's highlights.

The Apartments of the Orders of Chivalry

A permanent exhibition of Royal Orders is on show in the Apartments of the Orders of Chivalry at the Royal Palace. Four rooms make up the apartments, one room for each order. Until 1949, these halls were home to the Swedish Supreme Court, established in 1789 by Gustav III.

The Order of the Seraphim or the Order of His Majesty The King, is the most outstanding distinction in Sweden. The Order has only one Class with the dignity of Knight or Member and nowadays it is conferred exclusively on members of the Swedish Royal Family and on foreign heads of state or other persons of comparable rank. The Seraphim Medal also belongs to this order, and is controlled by His Majesty the King.

The Order of the Sword was originally presented for bravery in the field and at sea, and later also as a reward for long and distinguished service in the armed forces. Special degrees constituted the rank of the Knight, with the Order of the Sword-s Maltese-type cross only conferred when Sweden is at war. (Dormant since Order Reform of 1975.)

The Order of Vasa was intended as a reward for services in a number of fields, for presentation to persons not eligible for the "service orders" of the Sword and the Polar Star.
The Order of Vasa was a free order, i.e. unrestricted by rules of birth and education. The cross of the order is composed on the same lines as the insignia of the more senior orders and is surmounted by a crowned sheaf, the emblem of the Vasa dynasty. (Dormant since the Order Reform of 1975.) 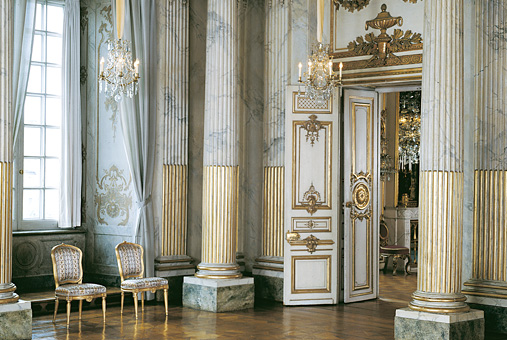 The Pillared Hall was originally a dining room before being modernised by King Gustav III. 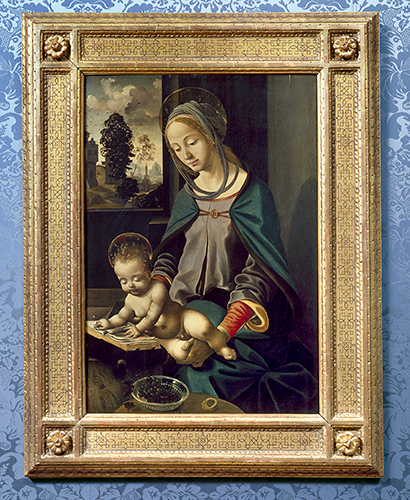 Madonna and Child from the gallery collection. 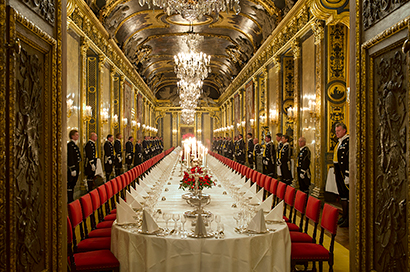 King Karl XI's Gallery in the State Apartments is ready for the Nobel dinner. 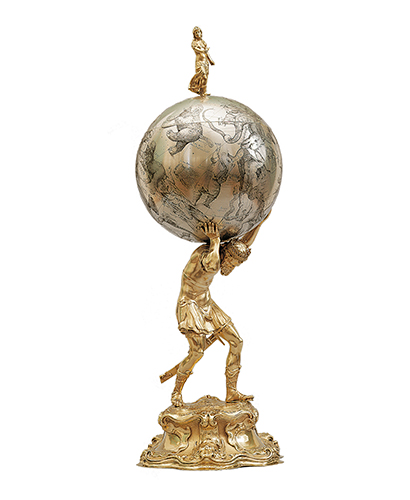 Atlas carrying a celestial globe. From Hedvig Eleonora's Treasury Collection in the Guard's Hall in the State Apartments. 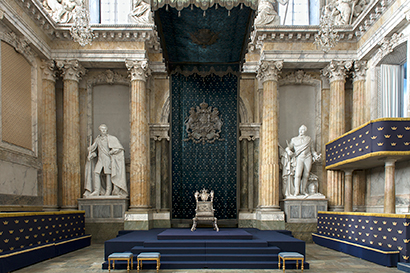 The Hall of State is positioned opposite the Royal Chapel. 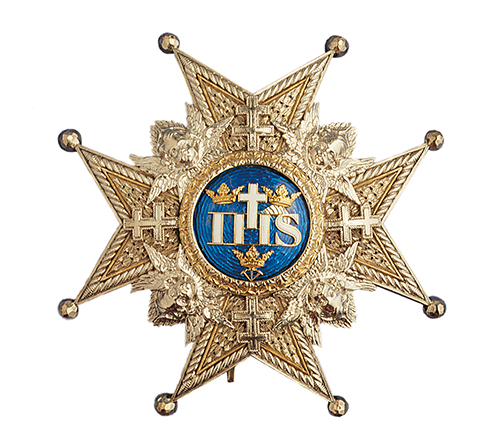 The Order of the Seraphim is Sweden's highest award. 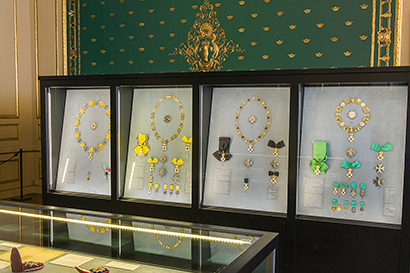 The Hall of the Order of Vasa, one of the four Apartments of the Orders of Chivalry with a permanent medal exhibition.

The Swedish Regalia are kept in the cellar vaults of the Royal Palace of Stockholm. Here you can see crowns used by kings, queens, prince...

The major jubilee exhibition Vasa to Bernadotte, 1523 –1973 –2023. Culture in Service of the Realm will showcase unique objects, takin...

The Royal Apartments at the Palace is a collective name for the magnificent state rooms that are used at The King and Queen's receptions....

Discover the Hall of State at the Royal Palace in 360°. This room was the centre of Swedish power for centuries, and is still used for of...

This year is a double jubilee, marking 500 years since Gustav Vasa was elected king in 1523 – ushering in a new era that shaped modern Sw...

The Thinking Hand is a scholarship competition for young draftsmen, an annual collaboration between the Royal Court and the Royal Acade...