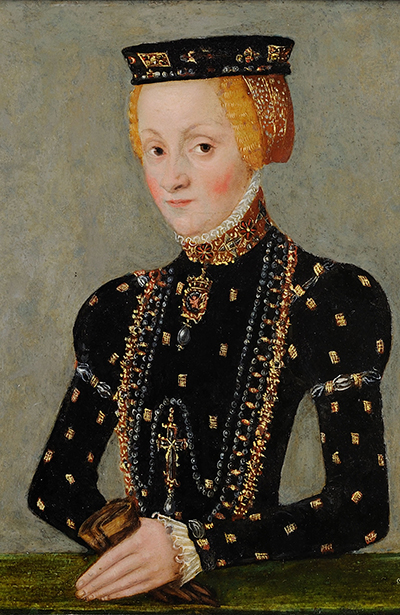 Katarina was the daughter of Sigismund I of Poland and Bona Sforza of Milan. She married Johan (III) in Vilnius in 1562. The couple's children included their son Sigismund (II) and their daughter Anna Vasa.

Pledges made in connection with the marriage of the King of Poland, Katarina's brother, assured her the right to free religious practice. This led to a rift with her brother Erik XIV, and they were imprisoned. During this time, Johan was influenced by Katarina's Catholic faith. After Johan was named king, this played a significant role in terms of contact with the papacy and other Catholic states.

Their reign marked the beginning of a cultural golden age in Sweden, and the queen's contacts across Europe influenced Swedish art and architecture.

Katarina Jagellonica portrayed by the German painter Lucas Cranach the Younger (1515–1586). The painting hangs in the Czartoryski Museum in Krakow, Poland.