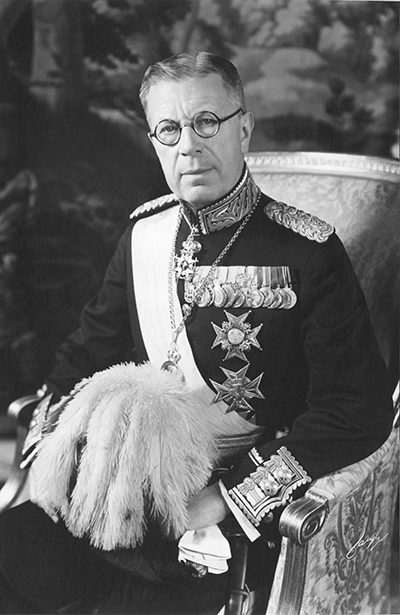 As king, Gustaf Adolf fully accepted parliamentarianism. He kept his political views to himself, but it was no secret that he had liberal beliefs. By always fulfilling his representative duties faultlessly, the king helped to create a new type of rule: democratic rule.

He had five children with his first wife Margareta. Crown Princess Margareta died at the age of just 38 in 1920. Three years later, he married Lady Louise Mountbatten.

Gustaf VI Adolf was renowned for his thirst for knowledge. He had been a keen archaeologist since his youth, and became an expert in ancient Chinese art.

Portrait of King Gustaf VI Adolf in uniform. Photo by the Bergne Portrait Studio, 1951. Photo from the Bernadotte Library's archive.