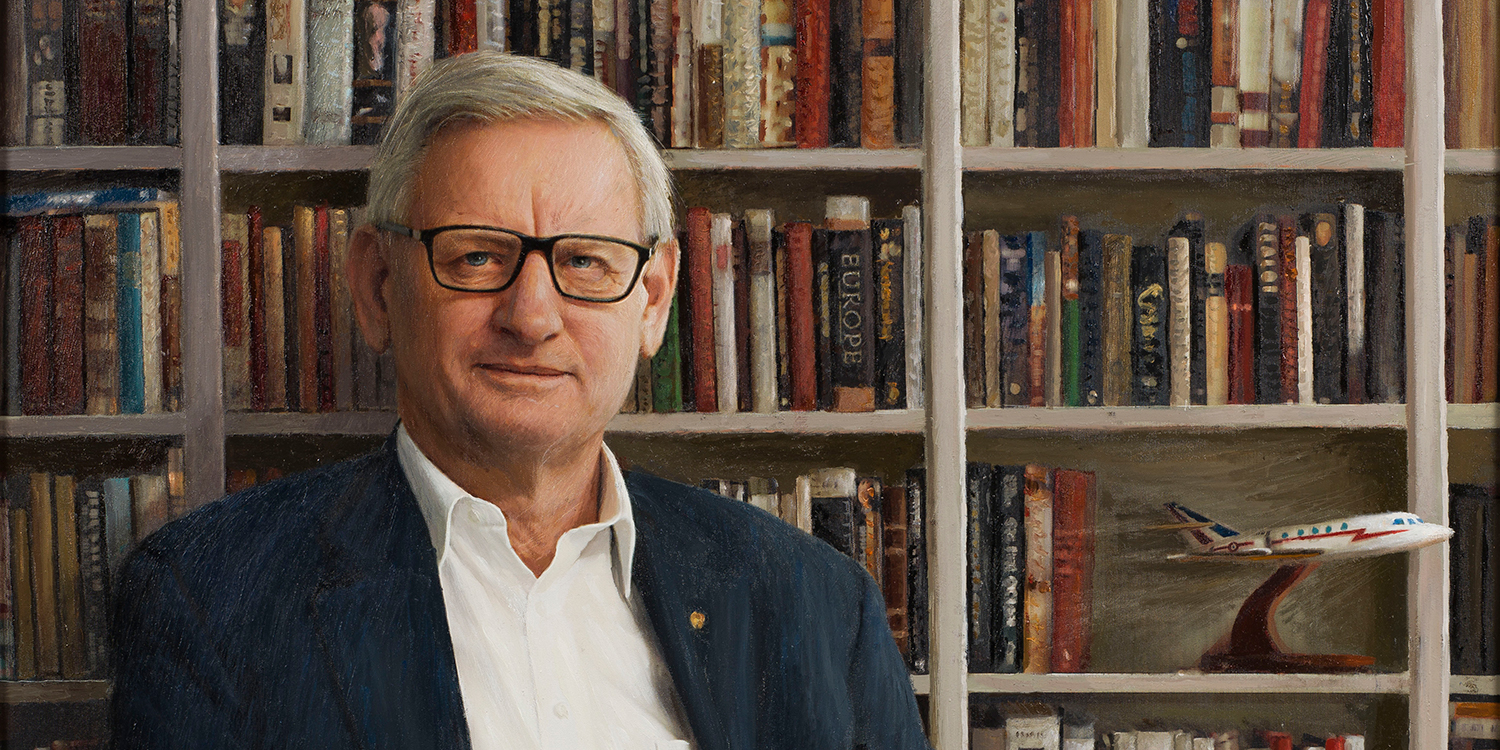 The model of the 2021 Portrait of Honour is Carl Bildt, a politician and former prime minister of Sweden. The portrait has been painted by Bo Larsson in an illusionistic style that reflects in detail the subject’s wide-ranging interests.

The Swedish National Portrait Gallery collection is added to every year with a number of works, including the Portrait of Honour – a painting of a deserving Swedish woman or man.

The portrait is on view at Gripsholm Castle from 2 June 2022.

When Bo Larsson was commissioned to paint a portrait of Carl Bildt, he was concerned as to whether his busy subject would have time to sit for him. Then, “like a gift from above”, the coronavirus pandemic hit, online meetings became the norm, and Bildt stayed put in Stockholm. Between them, artist and model decided that Bildt’s study was the right setting for the portrait. The entire background is taken up by a bookcase, but not in sharp enough focus for the onlooker to make out the titles. Only one spine reveals anything, but in this case the title is symbolic: “EUROPE”, Bildt’s main area of interest throughout his political career. On the shelf above, an object with a very specific meaning is visible: a model of the aircraft that was available for Bildt to use in his role as UN High Representative overseeing implementation of the peace agreement in Bosnia and Herzegovina between 1995 and 1997. In front of the bookcase, we can make out a desk covered in papers and a pen. The latter item has several meaningful associations: an instrument for executing political decisions by signing agreements, but also the tool of an author. Bildt is very much a writer-politician with a lifelong gift of self-expression and the ability to view current events in a historical perspective.

The artist has always considered it important for the onlooker to be met with a gaze. In this case, the gaze at first appears sharp, but as the onlooker approaches the portrait, it is transformed into a “good-natured smile”. This visual metamorphosis comes as a surprise, adding to the illusion of meeting the subject. The fact that Bildt’s glasses are not sitting straight may even enhance the sense of a real-life encounter, in a way that a formally posed portrait in a gilded Gustavian armchair would not.

The portrait is a painting by Bo Larsson. Born 1945 in Sala, the artist has called Stockholm home since the age of five. The Swedish capital has long been his main motif in works ranging from panoramic views to domestic scenes from his own studio. Larsson completed his studies at the Royal Institute of Art in 1972 and can be described as a figurative artist. He has always been an artist with a lyrical-picturesque vein who makes skilled use of light, but over the years he has increasingly used photography as an aid, especially in his portrait work, well aware of its possibilities and limitations. Larsson has never been content to treat art as mere reproduction, preferring to combine working material ad infinitum, like a collage. He alternates this with regular sittings with the model in front of the easel to make adjustments and additions. Overall, this process has enhanced the illusionistic character of his portraits over the years.

The Swedish National Portrait Gallery is the world's oldest national portrait gallery. This is also one of the world's largest portrait galleries, and currently includes approximately 5,000 works, mostly oil paintings, of which Gripsholm Castle houses more than 800. 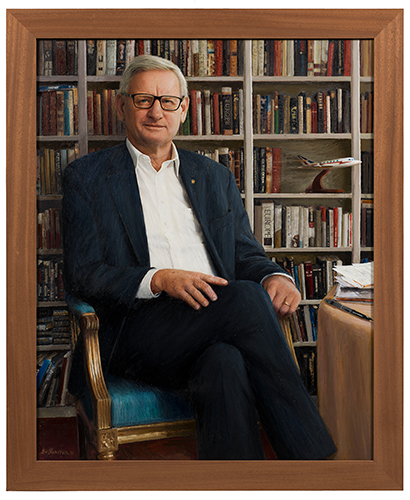