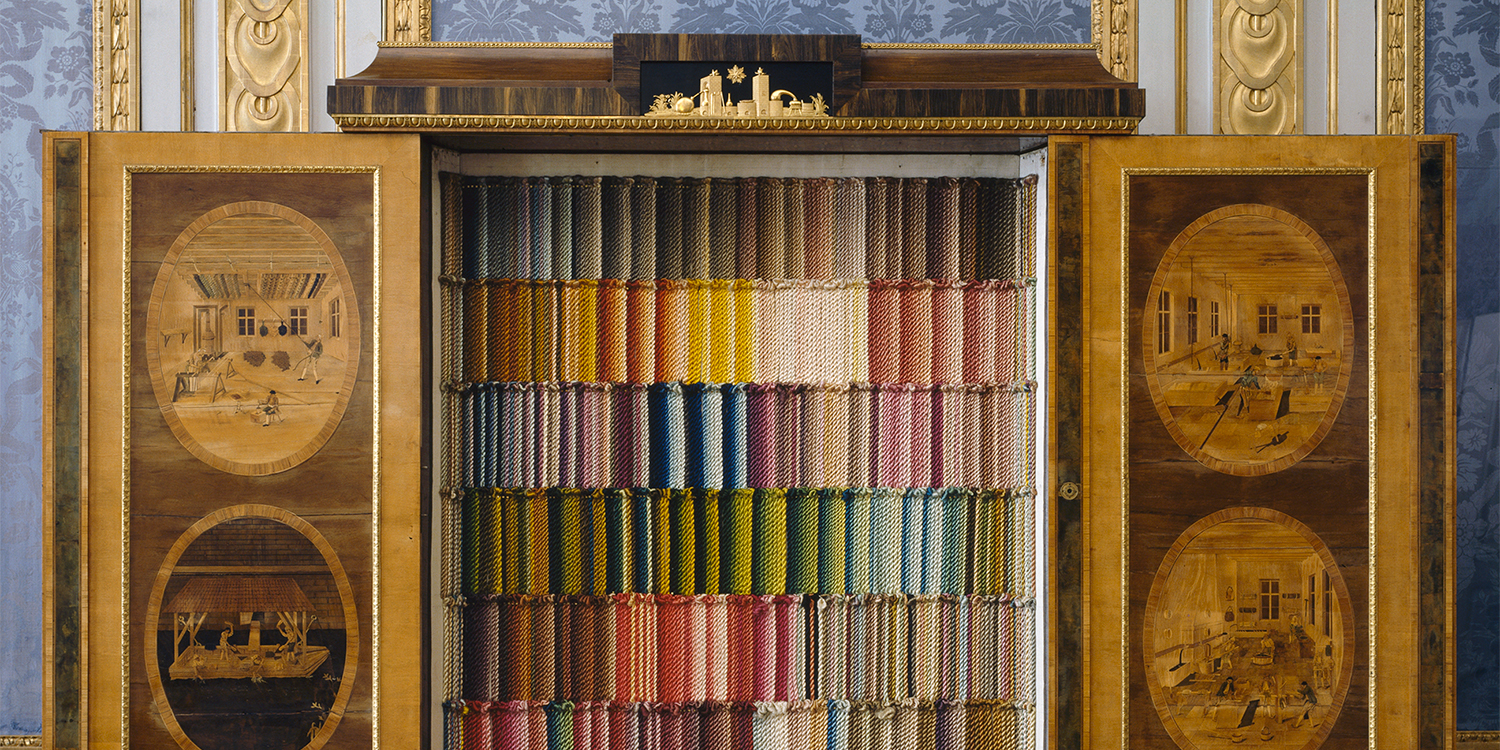 During the mid-18th century, Drottningholm Palace was at the centre of intensive efforts to cultivate silk in Sweden. In 1753, Queen Lovisa Ulrika proudly presented the Royal Swedish Academy of Sciences with raw silk from hand-raised silkworms.

She had cared for the silkworms herself, feeding them mulberry leaves. 13.3 grams of silk had been produced per 100 silkworms, and according to the Academy's records the quality was "as good, soft and durable as any foreign silk". These efforts had been undertaken with great seriousness. In order to feed the silkworms, Queen Lovisa Ulrika had mulberry trees planted on Drottningholm and recruited a French expert in sericulture, Jean Meaurin. The aim was to try to establish a new industry in Sweden.

"… as good, soft and durable as any foreign silk."

These attempts can be said to have succeeded to some extent. Sweden became a leading nation within silk weaving, paving the way for the country's industrialisation. In 1750, there were 260 silk weavers in Sweden. By 1766, this figure had risen to 964. However, the actual cultivation of silk was a little less successful. Getting silkworms to survive was not easy in the cool Swedish climate. Moth eggs were ordered from Southern Europe, and these then had to be hatched at the same time as the mulberry leaves appeared. Once the larvae had hatched, they needed to be feed with mulberry leaves. Those silkworms that did not eat of their own accord had to be fed with a feather or a small brush.

"How much silk we would not be required to buy from abroad, and how many thousands of people could make a living for themselves in this way?"

It was not only the queen who was keen to cultivate silk in Sweden. Several scientists – including her close friend Carl Linnaeus – also championed domestic sericulture: "How much silk we would not be required to buy from abroad, and how many thousands of people could make a living for themselves in this way?" Similar attempts were also carried out elsewhere in Europe, including by Lovisa Ulrika's brother Frederick the Great of Prussia. In a letter to Voltaire dated 1775, he wrote: "During these years, we have produced 10,000 pounds [about 5,000 kilograms] of silk." Central Europe was home to a successful industry for luxury goods, such as porcelain, lace and exclusive textiles.

Sweden, however, was a relatively poor nation at that time, with very few industries. Drottningholm's silk cultivation can thus be seen as an attempt to develop Swedish industry. The contemporary fascination with China and the Far East also played a part. China was seen as a country of wealth and spiritual harmony. Drinking tea from imported Chinese cups, wearing silk and being surrounded by exquisite Chinese objects was the height of refinement.

Kanton – the 'science park' of its time

Close to the Chinese Pavilion at Drottningholm, Lovisa Ulrika had a model factory built for manufactories, Kanton, where silk would be cultivated. Foreign experts were recruited, and she created an ideal living environment here where new industries would emerge. The idea is close to that of today's science parks. Do not be fooled by the attractive wooden buildings and the idyllic setting – many of the 18th century's high-tech manufactories could be found here. There was a gunsmith and a successful silk weaving mill, as well as "a silk stocking factory, a silk ribbon factory, and a lacework school or factory at which poor young girls are taught to produce the finest Brussels lace by a teaching mistress from Brabant".

"A silk stocking factory, a silk ribbon factory, and a lacework school…"

Kanton would be a royal role model for industrial activities in Sweden. Those who lived in the model village were obliged to dress properly when visited by guests of honour. In 1762, for example, a group of members of the Swedish Riksdag were shown around Canton. They were duly impressed, and the queen was praised for her silkworm breeding. Four years later, another study visit took place. During this visit, the queen presented more than two kilograms of home-produced silk.

The queen's efforts to cultivate silk continued for more than fourteen years, but it is not thought that any large quantities of silk were produced at Drottningholm. The Swedish climate was not particularly well suited to the mulberry trees needed in order for silkworms to thrive. However, there is still a cabinet at Drottningholm Palace containing silk samples as a reminder of this period in the palace's history.

Top image: A remarkable cabinet can be found at Drottningholm. It was given to King Gustav III in 1781 by the silk dyer Adrian Hardt. The cabinet has inserts depicting the various stages of the silk dying process, and contains samples of silk in every colour of the rainbow. Photo: Royalpalaces.se 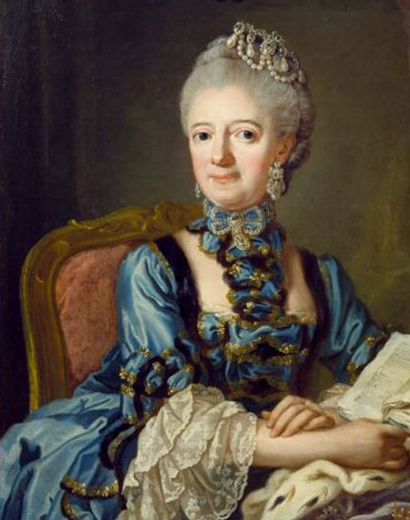 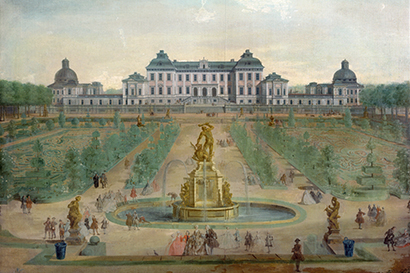 Lovisa Ulrika was not alone in cultivating silk in Sweden. She had mulberry trees planted at Drottningholm, and produced silk herself. Photo: Drottningholm Palace, attributed to Johan Pasch. This painting hangs at the County Governor's official residence in Nyköping. 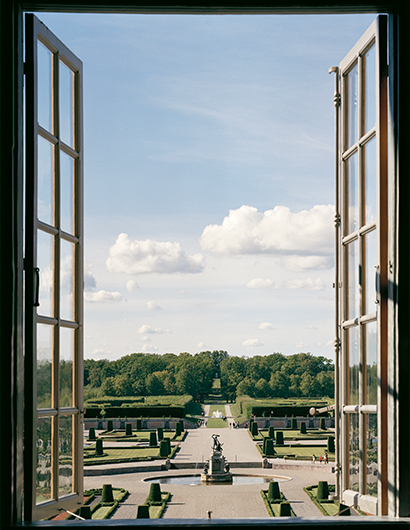 The queen recruited foreign experts for her silk cultivation. The aim was partly to establish an industry. Photo: Åke E:son Lindman 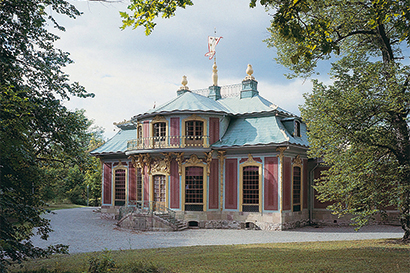 The contemporary fascination with China was probably one reason for choosing silk. China was seen as a country of wealth and spiritual harmony. The photograph shows the Chinese-style pavilion in Drottningholm Park that Lovisa Ulrika received on her birthday in 1753. Photo: Alexis Daflos/Royalpalaces.se 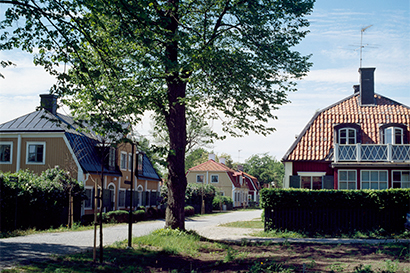 Lovisa Ulrika had the Kanton area built near the Chinese Pavilion – a model village for manufactories. Photo: Royalpalaces.se 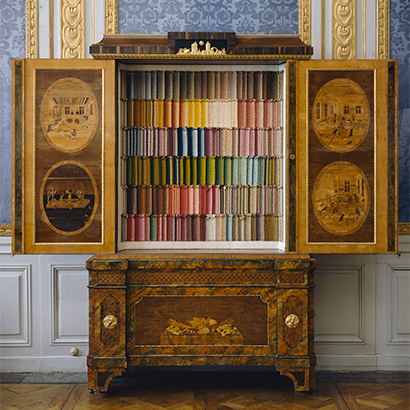 The silk cabinet at Drottningholm Palace was built by court cabinet maker Nils Petter Stenström, and was a gift for King Gustav III. Photo: Royalpalaces.se

FIND OUT MORE ABOUT LOVISA ULRIKA

The attempted revolution and the Queen's Crown

2020 is the 300th anniversary of Lovisa Ulrika's birth. To mark this anniversary, places where she spent her time have been filmed.

Watch the videos on the Royal Palaces' YouTube channel

Take the chance to see the world’s largest collection of Adriaen de Vries sculptures. The museum at Drottningholm has on display a unique...

Summer programme at the Royal palaces

We are delighted to be reopening all the Royal sites for the 2022 summer season. Discover ten Royal palaces, with their museums, chapels,...

Hunt for lions, find flowers and discover the Palace's gold. Challenging image hunts in the rooms of Drottningholm Palace is hosted for c...