Highlight: The Hercules fountain in the Baroque Garden

The Hercules fountain is located at the centre of the Baroque Garden, with its bronze figures by the leading sculptor of the Baroque period, the Dutchman Adriaen de Vries (1556-1626) who was Court Sculptor for Rudolf II.

The oldest part of the gardens came into being in the late 17th century, at the initiative of Queen Hedvig Eleonora, under the direction of the architects Tessin, father and son. This part is called the Baroque Garden, and it is situated next to the Palace, bordered by four rows of lime trees. The architects took their inspiration and ideas from the newly planted palace gardens of France, where the ideal was strict, ordered and symmetrical.

The Hercules fountain is located at the centre of the Baroque Garden, with its bronze figures by the leading sculptor of the Baroque period, the Dutchman Adriaen de Vries (1556-1626) who was Court Sculptor for Rudolf II.

At the end of Sweden’s period as a great power, there were no fewer than 32 bronze sculptures in Drottningholm Palace Park, most of which were by de Vries. In a country such as 17th century Sweden that had so few sculptures, this large number of high quality bronze sculptures was a great attraction. The fact that the majority of de Vries’ sculptures ended up in Sweden is due to the nation’s military successes during the 17th century.

With only a few exceptions, these sculptures remained in place until the present day. When it was noted that the outdoor climate had caused extensive damage to the originals, they were replaced with modern copies in cast bronze. The originals were moved to the Dragoon Stables at Drottningholm.

Drottningholm Palace Park is part of the World Heritage Site Drottningholm, and is open every day of the year for self-guided visits. 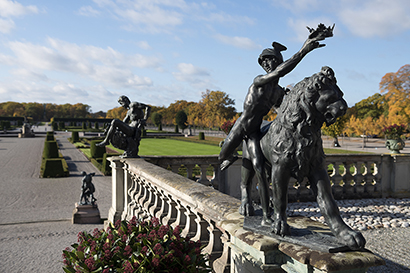 See the world's largest collection of Adriaen de Vries sculptures. The sculptures in the park is replaced by modern bronze casts and the originals i safe kept at the Museum de Vries. Photo: Lisa Raihle Rehbäck/The Royal Court

Take your children and grandchildren on a trip to Drottningholm. Here, you can go on a lion safari, hunt for gold and discover plants.

Take the chance to see the world’s largest collection of Adriaen de Vries sculptures. The museum at Drottningholm has on display a unique...

Throughout the years Drottningholm Palace has changed and the royal personages who lived here have left their mark on the Palace's interi...

Drottningholm Palace Park is open all year round. Here, you can wander through historic stylistic ideals from the 17th century Baroque to...

“He took me to the side of the pleasure gardens, and I was surprised to find myself suddenly standing in front of a real fairy tale palac...

Drottningholm Palace Chapel was opened in 1730, and has been in continuous use ever since. The architect was Tessin, and the interior was...

The artist Evert Lundquist had his studio in the old machine house at the Chinese Pavilion. The studio is now a highly atmospheric museum...

Summer programme at the Royal palaces

We are delighted to be reopening all the Royal sites for the 2022 summer season. Discover ten Royal palaces, with their museums, chapels,...

Hunt for lions, find flowers and discover the Palace's gold. Challenging image hunts in the rooms of Drottningholm Palace is hosted for c...